Filtech 2018: The media is the message 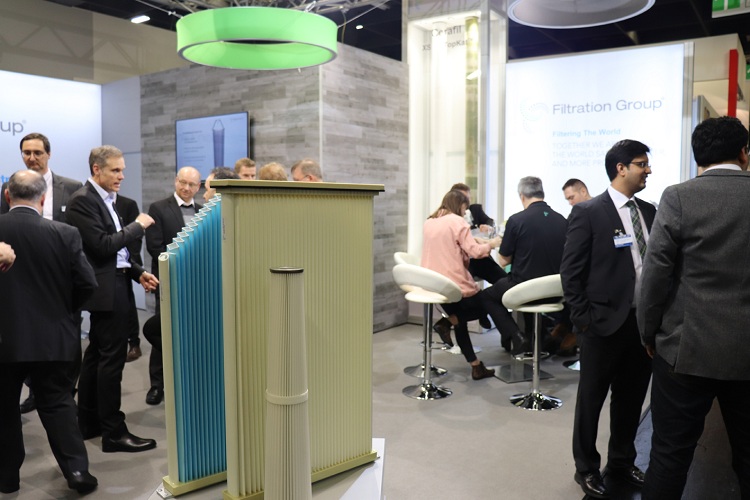 Filtech 2018 demonstrated the current buoyancy of the filtration industry and the key role nonwovens play within it. Adrian Wilson reports.

In her keynote address at the Filtech 2018 conference and exhibition, held in Cologne, Germany, in March, Dr Christine Sun, chair of the American Filtration Society (AFS), said that the global filtration industry now has an annual value of over US$80 billion.

Of the various filter media materials employed by the industry, nonwovens now account for around 37% by volume, according to AFS projections.

“Sustainable development is behind all filter media R&D activity and the introduction of new products,” Sun said, citing recent innovations such as the products based on glass-free substrates and multi-layered PET materials launched in response to the demands of new fuels and biodiesels as examples.

She added that membranes, employed for finer filtration that cannot be achieved by conventional fabrics, also account for 23% of the filter media market.
However, given that nonwovens are generally used as separation layers and reinforcements for membranes, nonwovens can be considered to be employed in media for the entire spectrum of filtration performance requirements.

The use of nanofibres is also closing the gap between membranes and nonwovens, with a leader in the field, South Korea’s Finetex, for example, now producing pure synthetic nanofibre media to E12 levels of performance (99.5% particle capture) and making them suitable for HEPA (high efficiency particle air) filtration applications.

Finetex has significantly expanded its global capacity from its original base in South Korea, and now has additional major plants in the Philippines and Canada, both of which are in the process of being further expanded. It has also formed a joint venture in Wuxi in China, which became operational at the end of 2017 and is now also being expanded.

As such, the company reported a sales increase of 41.6% in 2017 compared to 2016, to Won 63.5 billion, with year-on-year operating profit up a total of 237% at Won 1.8 billion, as the company’s new commercial capacities have started up both in Asia and North America.

Finetex director of sales and marketing in Europe, Karl Luukkonen, said the company’s products fell into two major categories, low weight coatings of between 0.05gsm and 0.3gsm and heavier materials of around 7gsm.

“We have 650 patents covering nanofibre production, in addition to many related to end-use applications and our technology is capable of the industrial-scale production allowing us to achieve the price points the markets are willing to pay,” he said.

In addition to their higher levels of filtration, the benefits nanofibres can bring to industrial markets include overcoming the restrictions of electrostatically-charged filter media and reducing the use of glass fibres.

The company has conducted tests at seven coal power plants to prove the benefits of its nanofibre filters, while the new plant in Wuxi has an initial focus on automotive filters, which it expects to add revenues of between $10-25 million annually once fully utilized.

“In general we are anticipating very good business expansion in industrial filters globally, given the new focus on air quality and fine dust becoming a social issue,” said Finetex CEO Jongchul Park. “With the implementation of the new ISO16890 standard we are seeing increased demand for our products from existing customers, in addition to securing significant new business.”

AAF Flanders also employs nanofibres in its air filters and is part of a global business currently being established which will have annual sales of around $1 billion, following two recent acquisitions by parent company Daikin Industries.

Daikin is a Japanese multi-national air conditioning manufacturing company headquartered in Osaka and had sales in 2017 of $18.5 billion. It is basing its filtration business on American Air Filter Company (AAF), headquartered in Louisville, Kentucky, acquired by Daikin in 2007 and Nippon Muki, headquartered in Tokyo and acquired in 2009.

Filtration Group is another company which has emerged as an industry leader via a series of acquisitions – no less than 16 of them since 2009 – and at this year’s Filtech drew attention to a range of its innovations, including the use of Filtrair Dropsafe M6 pocket filters in offshore oil and gas turbines.

One big customer is Norway’s Wide Industrier, which supplies its GE LM2500 gas turbines for compressor drives and electrical power on offshore platforms to companies such as Statoil – Europe’s second biggest gas supplier and its largest operator of oil and gas facilities.

On oil and gas offshore platforms, Statoil has operated three-stage high performance air intake systems which are gradually being retrofitted with the two-stage AS Wide Infidry units containing Filtrair Dropsafe M6 pocket filters to both extend the operational life of the filters and the efficiency of the air intake system.

Such a retrofit significantly increases compressor efficiency while reducing salt contamination and corrosion.

Filtrair Dropsafe M6 pocket filters combine a particle filter, a coalescing filter and water and salt removal in a single device and the self-supporting, leakage-free welded pockets retain their shape even if there is an increasing loss of pressure, or in the presence of moisture or contamination.

The filter media is based on a copyright-protected hydrophobic material which is elastic in water and the pleat design which gathers water inside the pockets and empties it into a container installed upstream of the filter is also patented.

As a sure sign that Filtech continues to build momentum, of the total of 380 exhibitors, no less than 150 were not present at the last Filtech show in 2016, including some very big industry players such as BWF, Pall Corporation and Porvair.

Also not at Filtech 2016 was Mann+Hummel, which with annual sales of around €3.5 billion, employs over 20,600 people at 80 locations in 28 countries, and is a leader in filtration for the automotive industry.

At Filtech 2018 the company introduced its new Flexline range of air filters for engine compartments where installation space is becoming extremely limited as a result of new performance components such as turbochargers and diesel particle filters.

“Better utilisation of the design space allocated by the OEMs is required to fulfil their increasing demands on engine air filter systems,” said vice-president of corporate communications Harald Kettenbach. “Designers and engineers now have to haggle over millimetress of space.”

Flexline is a series of compact, performance-enhanced filters with variable designs made possible by laser cutting, as well as the relocation of clamping elements such as clips or screws to the inside of the air cleaner system, in order to reduce the external contours and avoid blocking other elements in the confined spaces.

Panel air filters based on rectangular, trapezoidal and polygonal forms with straight lateral edges are currently the dominant filter designs, but Flexline filters have curved external contours with larger flow surfaces. This provides new scope for development to achieve targeted improvements in the filtration characteristics or pressure loss.

Flexline elements are also flatter than conventional products for either a flatter housing or an increased pleat height.

A further advantage in terms of optimisation of the intake system is that acoustic performance is improved due to the increased compactness of the air filter housings.

Mann+Hummel also displayed one of the first special Streetscooter delivery vehicles which are currently being trialed in selected German cities by Deutsche Post DHL Group, the world’s largest postal service.

These vehicles are equipped with the company’s fine dust particulate filter – representing an entirely new use for nonwoven filter media and a new filter class in the automotive industry.

“We are embracing all new forms of transportation currently being developed because there will be many new opportunities for us to develop solutions with electric cars, autonomous vehicles and beyond,” said Harald Kettenbach at the show. “Electric vehicles are not as yet free of emissions because they release particulates into the atmosphere due to tire, brake and road abrasion. These contribute significantly to pollution in cities.

“This new filter prevents emissions directly at the source of fine dust to the ambient air, in particular in city traffic, which is characterized by frequent braking processes. As such, it represents a major opportunity for cost-effectively reducing pollution.”

Streetscooter’s vehicles were developed at Aachen University and the spin-off company has subsequently become a dedicated subsidiary of DHL.

“With these new fine dust particle filters we can further improve the environmental performance of our vehicles and we are pleased to be pioneering what we believe will become a major trend,” said Streetscooter CEO Achim Kampker.

As the world’s leading nonwovens manufacturer, Berry Global is also well-known in the filtration industry for its Reemay fabric – a unique spunbond polyester based on trilobal fibres that provides 67% more surface area than media based on round fibers and increases the interaction between particles and the fiber surface. Reemay fabric also eliminates the need to point-bond and the creation of points that can restrict airflow.

At Filtech 2018, the company also promoted its patented Meltex meltblown technology. Meltex is an ultra-uniform meltblown and the media of choice for critical applications in highly-regulated markets where filtration accuracy is most important. It is available in a wide range of basis weights from 12 to 200gsm and is able to meet requirements in life science filtration through a range of polypropylene and PBT grades.”

In addition Berry highlighted a specific product range for the filtration of cooking oil, with the ability to maintain a minimum 40% wet tensile strength after 60 minutes at 180ºC immersed in oil. The materials in this range include INT viscose chemically-bonded media which have a parallel web structure, Reemay 2014 PET spunbond and FC 100, a crosslaid, chemically-bonded viscose nonwovens.

The company also points out that  NanoWave filters last longer than conventional glass media, and the high-loft media offers twice the dust-holding capabilities of traditional synthetic media, resulting in a more efficient and economic filter.

Cerex, based in Cantonment, Florida, is a manufacturer of specialised spunbond nonwoven media based on nylon 6.6.

“All of our fabrics exhibit excellent uniformity, plus high tensile and tear strength, even at low fabric weights. The thermal stability of our nylon fabrics is outstanding, having high melt points (500°F) and resisting attack by many solvents, alkalis, and dilute acids used in manufacturing processes. Our fabrics have provided product design flexibility to engineers worldwide in many areas including burst strength improvements, lowered delta p performance, reduced media and contaminant migration, and greater fiber integrity under higher temperature environments.”

Multitexx based in Herdecke, Germany, promoted its uniformly-calendared spunbond of polyester (PET) spunbonded nonwovens  whose properties can be tailored to fit many applications and specific requirements in weights of between 15-150gsm.

The outstanding characteristic of these spunbonds is their particularly uniform structure even at low weights.

Low & Bonar, meanwhile showcased its Colback nonwovens and Enka 3D mats for filter reinforcement and spacer products. Colback is made of bicomponent, mechanically-drawn endless filaments with a unique sheath/core composition.

Its polyester core gives it an unmatched strength and dimensional stability while sheath options include PA6, polypropylene or polyester, each with specific benefits in filtration applications.

The material works particularly well as a support carrier. Enka 3D multi-dimensional entangled filament products are made from polyamide, polyolefins or polyester and sustain a wide range of profiles, combinations, weights and thicknesses.

In industrial liquid mist separators, air and waste water treatment systems, a high contact surface area is the key to scrubbing contamiants from waste air or water streams. Due to its 95% open spacing, Enkamat allows for optimal flow, as well as providing and excellent surface area for high efficiency removal systems.

Among other nonwovens companies appearing at Filtech for the first time this year were: