New 100% bio-PET will scale for Coca‑Cola 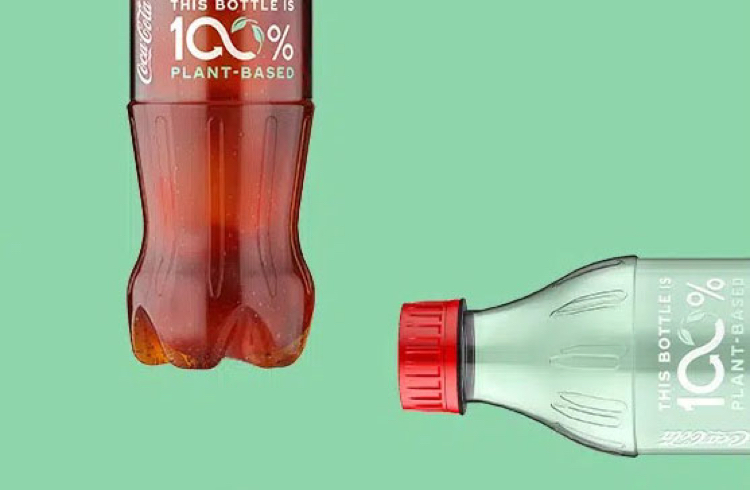 ATLANTA – In a development that in the future could prove very significant for the nonwovens industry, Coca‑Cola has unveiled its first-ever beverage bottle made from 100% plant-based plastic, excluding the cap and label.

It has also been made using technologies that are ready for commercial scale.

The prototype bottle comes more than a decade after the company’s PlantBottle debuted as the world’s first recyclable PET plastic bottle made with up to 30% plant-based material. A limited run of approximately 900 of the prototype 100% pet bottles have been produced.

“We have been working with technology partners for many years to develop the right technologies to create a bottle with 100% plant-based content – aiming for the lowest possible carbon footprint – and it’s exciting that we have reached a point where these technologies exist and can be scaled by participants in the value chain,” said Nancy Quan, chief technical and innovation officer AT Coca‑Cola.

PET, the world’s most recycled plastic, comprises two molecules – approximately 30% monoethylene glycol (MEG) and 70% terephthalic acid (PTA). The original PlantBottle, introduced in 2009, includes MEG from sugarcane, but the PTA has been from oil-based sources until now. PlantBottle packaging looks, functions and recycles like traditional PET but has a lighter footprint on the planet and its resources.

Coca-Cola’s new prototype plant-based bottle is made from plant-based paraxylene (bPX) – using a new process by Virent – which has been converted to plant-based terephthalic acid (bPTA). As the first beverage packaging material resulting from bPX produced at demonstration scale, this new technology signals a step-change in the commercial viability of the biomaterial. The bPX for this bottle was produced using sugar from corn, though the process lends itself to flexibility in feedstock.

The second breakthrough technology, which The Coca-Cola Company co-owns with Changchun Meihe Science and Technology, streamlines the bMEG production process and also allows for flexibility in feedstock, meaning more types of renewable materials can be used. Typically, bMEG is produced by converting sugarcane or corn into bioethanol as an intermediate, which is subsequently converted to bioethylene glycol. Now, sugar sources can directly produce MEG, resulting in a simpler process.

UPM, the technology’s first licensee, is currently building a full-scale commercial facility in Germany to convert certified, sustainably sourced hardwood feedstock taken from sawmill and other wood industry side-streams to bMEG. This marks a significant milestone toward the commercialization of the technology.

“The inherent challenge with going through bioethanol is that you are competing with fuel,” said Dana Breed, dlobal R&D director at Coca-Cola. “We needed a next-generation MEG solution that addressed this challenge, but also one that could use second generation feedstock like forestry waste or agricultural byproducts. Our goal for plant-based PET is to use surplus agricultural products to minimise carbon footprint, so the combination of technologies brought by the partners for commercialization is an ideal fit with this strategy.”

In 2015, Coca-Cola unveiled its first prototype for a 100% bio-based PlantBottle at the Milan Expo using lab-scale production methods to produce bPX. This next-generation 100% plant-based bottle, however, has been made using new technologies to produce both biochemicals that make the bottle and are ready for commercial scaling.

“Our goal is to develop sustainable solutions for the entire industry,” Breed said. “We want other companies to join us and move forward, collectively. We don’t see renewable or recycled content as areas where we want competitive advantage.”

Since introducing PlantBottle, Coca-Cola has allowed non-competitive companies to use the technology and brand in their products – from Heinz Ketchup to the fabric interior in Ford Fusion hybrid cars. In 2018, the company opened up the PlantBottle IP more broadly to competitors in the beverage industry to scale up demand and drive down pricing.

In Europe and Japan, Coca-Cola, with its bottling partners, aims to eliminate the use of oil-based virgin PET from plastic bottles altogether by 2030, using only recycled or renewable materials. While the majority of plastic packaging material will come from mechanically recycled content, some “virgin” material will still be needed to maintain quality standards. Coca-Cola is investing in and driving innovation to boost the supply of feedstock from renewable technologies as well as from enhanced recycling technologies. Enhanced recycling “upcycles” previously used PET plastics of any quality to high quality, food grade PET.

“We are taking significant steps to reduce use of ‘virgin’, oil-based plastic, as we work toward a circular economy and in support of a shared ambition of net-zero carbon emissions by 2050,” Quan said. “We see plant-based plastics as playing a critical role in our overall PET mix in the future, supporting our objectives to reduce our carbon footprint, reduce our reliance on ‘virgin’ fossil fuels and boost collection of PET in support of a circular economy.”